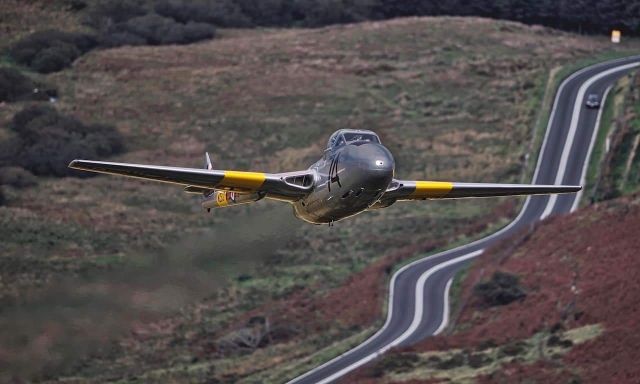 The de Havilland Vampire was the first single engine jet fighter to enter service in the RAF. The prototype made its maiden flight on 20th September 1943; over the next few years the Vampire claimed the following ‘firsts’:

In April 1946 the Vampire F1 entered service with 247 Squadron at RAF Chilbolton, Hampshire. This was replaced in 1948 by the Vampire F3, with re-designed tail fins, a lower tailplane and upgraded engine. The clipped-wing ground attack FB5 also started to arrive in 1948; but was soon superseded by the FB9, which was basically the same aircraft, but fitted with an air-conditioning unit to permit more comfortable operation in warmer climates.

The next version was the two-seater NF10, designed to accommodate a radar operator positioned next to the pilot. This in turn led onto the two seat training version, the Vampire T11, which first flew in1950 and served in Britain until 1968.

As a two-seater trainer, the Vampire T11 excelled. The side by side seating ensured both pilots had good visibility. The aircraft’s inherent stability and docility also made it a relatively safe and effective platform for instruction. Later, the Vampire provided advanced training and weapons instruction with rockets and bombs fitted under the wing. This compared favourably with the tandem cockpit and completely unarmed Meteor T7.

The basic Vampire lent itself to the inevitable mutations that so characterised the immediate post war cash-strapped British aviation industry. With swept wings bolted to the Vampire fuselage and no tail at all, the DH 108 was the UK’s first, experimental, swept wing aircraft. 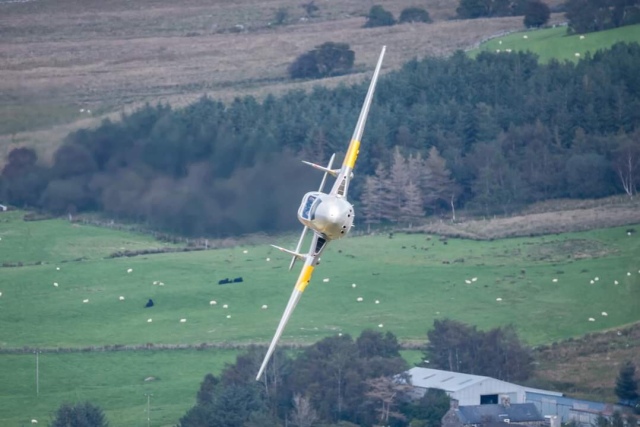 On the 9th September 1948 the third and final DH108 Swallow prototype, VW120, exceeded the speed of sound in a shallow dive – the first jet aircraft to achieve this feat. With new, thin wings and swept leading edges, the DH 112 Venom was born – originally referred to as the Vampire FB8.

The engine itself was another major breakthrough, following years of dedicated research by Frank Halford. The “Goblin” engine produces an incredible and distinctive sound – one of the many reasons this aircraft is a proven crowd pleaser at air shows!

These aircraft are now so rare that the National Aviation Heritage Register (NAHR) lists Vampires as “Benchmark” aircraft; the highest category available for preservation.